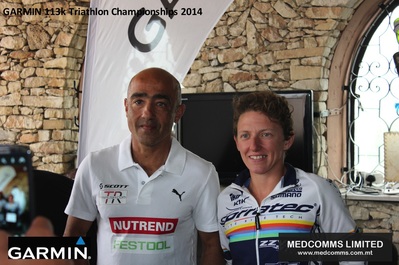 The Malta 113km Long Distance Triathlon Championships, this year for the first time sponsored by Garmin, has become a staple fixture on the triathlon calendar.

Covering a total distance of 113km, split into a 1.9 kilometre swim, a 90 kilometre cycle and a half marathon, i.e. a 21km run,  this event is in its eight year, and is considered to be a great training ground for endurance athletes, irrespective of their levels and their goals.

The popularity of the event has resulted in a substantial amount of foreign triathletes signing up for the race, giving it more of an international feel to all those taking part.  Whilst the main focus of the race will be the individual athletes undertaking the full distance the organising team will be encouraging relay teams (swimmer/cyclist/runner) to be formed. Past relay participation has seen quite a number of relay team athletes undertake a full distance in subsequent races so this is an excellent opportunity to introduce them to long distances.

This year’s race, scheduled for the 18th of May, will once again take place in Birzebbugia. In order to ensure a better and safer racing experience, discussions and co-ordination with the Malta Triathlon Federation led to some changes being made to the original cycling route. In addition to this, the Malta Triathlon Federation has seen this race being designated as the official Long Distance Championship race.

“We are very pleased to have worked closely with the Malta Triathlon Federation to upgrade the status of this race. Endurance racing has seen a sharp increase in popularity in Malta, with over 25% of triathletes competing in some type of endurance event throughout the year. This race is a perfect opportunity for triathletes to test their skills, either in preparation for races such as Ironman, or even just as a taster to see their aptitude for endurance racing, hence the possibility to join in relay teams” explained Charlie Demanuele, endurance athlete and race organiser.

“The Malta Triathlon Federation welcomes such initiatives as they are the medium to develop the various angles of multisport on the island” said Cyprian Dalli, President of the Malta Triathlon Federation. “We have been working closely with the organisers to ensure that all the necessary conditions are met. We are confident that with the experience and enthusiasm the race organisers have this race will be a success”.
Copyright © 2018 | Medcomms Limited, 4, Msida Road, Gzira GZR1401. MALTA