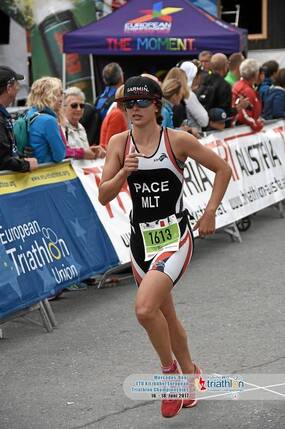 My name is Hannah Pace and I am a 21-year-old aspiring triathlete. Only discovering the sport 3 years ago, I consider myself as still relatively new to Triathlon. Having said this, I have already left quite a mark in both the local and international scene.

During my first Triathlon season in 2012 I was lucky enough to catch the eye of Garmin Malta who saw that I had the potential to be a top contender within the sport. It is with their help that a year later, I proved that I was a triathlete to watch, being selected for the Malta National Triathlon Team where I even brought home a gold medal at the 2013 European Age group Triathlon Championships in Turkey.

Currently I am one of the top female triathletes in Malta as well as the national road cycling champion and national cross triathlon champion. I have participated in a number of other races abroad with great results such as my recent win at the ‘Triathlon Olimpico Citta’ di Palermo’.

For me, triathlon means early mornings, commitment, sacrifice but above all fun. I train 6 days a week, sometimes 3 times a day, under the careful watch of my coach Dermot Galea and love every minute of it.  Although triathlon is an individual sport, I have some great teammates who challenge me and they are a big reason for my constant improvement.

I have big goals set for myself in this sport but what I have learned is that it is important to take things slow and improve gradually. In the meantime I will keep giving my hundred percent and have faith in all the people behind me. Over the years Garmin have been of constant support to me and I have them to thank for opening the doors to a number of opportunities.